Setting up an Endowment

Many charities have an endowed component to their finances. The term endowment often confuses people and they are really unsure what it means. I repeatedly use the comparison to a bank account. A typical endowment has a bunch of money (capital) that is invested. The principal remains untouched, and only the investment earnings (interest) are shaved off each year, so that the principal remains in perpetuity. This allows for the endowment to generate funds annually forever.

Now, this is a very simplistic view of endowments, but it illustrates the point. In Canada, there needs to be an endowment agreement between the donor and the charity, otherwise the charity would need to spend at least eighty percent of the capital on their “mission” in the following year. The whole point of the endowment is to preserve the capital, so we implement a 10-year rule into the agreement that allows the charity to segregate and hold these endowed funds so they do not fall under the disbursement quota. (Basically, the 10-year rule says that the charity will not touch the principal for a period of at least 10 years, but the intention is usually for the gift to remain in perpetuity.)

The laws in Canada are to be changed in the next few years regarding the minimum payout by Foundations (and many Foundations use this percentage as their “annual payout rate”). For discussion, let’s call this 4%.

In order for an endowment to distribute 4% annually, one would need to look at some quick math:

Minimum disbursement4%Inflation Fighter (so the money disbursed today holds the same value in future years)1.5%Reserves (so there are distributions when fund loses money — as it does every 8 yrs on average)1.5%Money manager, custodian and advisor fee (for professionally managed endowments)0.5%Administrative fee (that the charity uses to recoup costs)1.0%TOTAL9.5%Target Endowment Return

So, from the table above, you can see that the fund would need to generate approximately 9.5% in order to distribute 4% annually. The 9.5% minimum return would be a fairly ambitious target, but one that is calculated for in every charity’s Statement of Investment Policy and Procedures (SIPP).

When to add to the Endowment

Many charities have a policy of endowing a gift if it comes to the charity via bequest. (Of course, a charity must honor the direction laid out in the will, but for this example, let’s use the case of an undesignated gift). The thought process is that the donor spent the better part of their life earning the money to bequeath to your organization, so it seems fitting to endow the bequest, and to use the funds for a long period (as opposed to spending them quickly).

Some organizations have a policy of a minimum threshold for an endowed fund. Some have a $5,000 threshold and I have seen others with a $100,000 threshold. Often, the endowed funds get pooled together for investment purposes, but tracked separately for administrative purposes.

The Term “Endowment” can Confuse People

Endowments often confuse donors. Some use the term endowment and foundation interchangeably (and unfortunately inappropriately). An endowment is an investment vehicle that could live within a Foundation. I remember once a donor insisted a seniors’ home set up their own independent endowment so that she could leave a bequest there. (The seniors’ home was already a qualified donee, as a not-for-profit). There are huge legal ramifications to starting your own charity, not the least of which are annual auditing and prudent investor laws. What this donor really wanted was a fund somewhere for the exclusive benefit of the seniors home.

This is a pretty meaty subject, and I implore you to use your professional allies (lawyers, accountants, investment people) to help navigate these tricky waters.

The post Setting up an Endowment appeared first on YUCKS Enterprises. 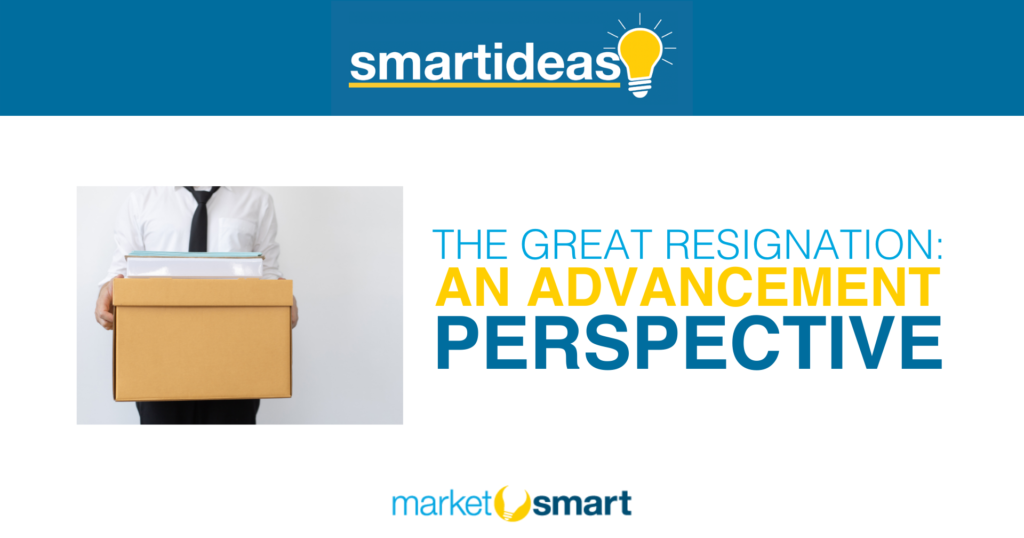 The Great Resignation: An Advancement Perspective

The Why is More Important than the ...