Home›Annual Campaign›3 Tips for Fundraising in a Recession

3 Tips for Fundraising in a Recession

Annual Campaign
by Marc A. Pitman

One of the interesting things of being an active blog for twenty years is you get to cover things like fundraising in a recession. Multiple times. A quick search shows blog posts on recession proof fundraising going back at least 14 years. Including “10 Tips for Fundraising in a Recession.”

The experts seem to be debating about whether we’re technically in a recession or not. But we as fundraisers are working with human beings and emotions. No matter how strong an economy might be, rising inflation and falling stock markets shake donors. And can make nonprofit fundraisers timid about asking for donations.

Timidity is a death sentence for fundraising in a recession. We don’t have the right to decide whether a donor gives or not. And not asking is not even honoring donors enough to make a decision.

Respect your donors enough to ask. There is nothing compassionate about not asking.

3 Tips for Fundraising in a Recession

One of the biggest mistakes I see nonprofit leaders make is confusing not asking donors with being compassionate. Leaders may take peek at their retirement account and get scared. Or talk to a board member who is nervous about the future. Being scared or uncertain about the future is normal. But don’t let it get in the way of asking for support. If we are in a recession or heading toward one, your staff needs to know their paychecks are secure. And your mission is likely needed even more in recessions than in normal times. If you keep asking, one of the amazing things you’ll find is that in a world spinning out of control, giving to nonprofits can be very centering for your donors. In every recession I’ve fundraised through (four at this point), donors have thanked me for allowing them to give!

One of the most amazing things about recessions is that it’s one of the few times when you don’t have to educate your donors. They get it. They know it’s hard out there. And they know people are more in need. So this is a time when people step up and give in, frankly, surprising ways.

Recessions are hard. But not necessarily fatal.

Fundraising in recessions does take more effort. Both at convincing ourselves people really do want to give. And at getting the message of hope and impact through all the messages of doom and gloom.

But humans are generous. Especially when clearly asked. And we’ve learned from past recessions that the nonprofits that stop fundraising take a much longer time getting back to normal fundraising levels.

So keep on asking. Remember: there’s nothing compassionate about not asking.

The post 3 Tips for Fundraising in a Recession appeared first on FundraisingCoach.com.

PODCAST: How Osler Health is Activating its ... 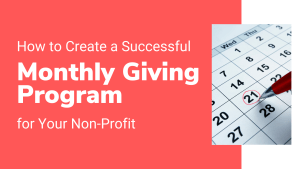 The Best Way to Build a Steady ...